A trip through Arizona is a great adventure on its own.  You can visit a volcano, a giant meteor crater, snow capped mountains, the grand canyon,  the hoover dam, The red rock valley, ancient cultural landmarks, a painted desert, a petrified forest...  the list goes on.  There is so much to explore that one must take pictures of the unique landscape of Arizona to remember how different it truly is.

And on occasion those photographic memories may inspire you to paint or animate.  My Fiance and I had created 2 paintings each of different places close to the Camp Verde area.  The first painting I created was of a stair case cascading into Montezuma well.

It had been raining and Travis and I took shelter under one of the cliff sides and I liked the composition of the stone steps down to the water.  Montezuma Well is part of the native American ruins associated with Montezuma Castle.  It is a large well that collects rain and has stone shelters on the inside walls.  Clay pottery, arrows and other remnants of the Natives that once lived there can still be found amongst the desert cliff dwellings.
Posted by Janet Simpkins at 10:00 AM

One of my favorite games is Fallout New Vegas.  Even though its glitchy and freezes allot, I still enjoy it. Mostly Because I have visited Vegas and the Hoover Dam.  The Dam in the game  is similar in exterior structure but is missing some of the features I loved about the original dam.

The Hoover Dam has beautiful Native American art symbols through out it on the floors and Art Deco bronze architecture on the Visitor center gates. 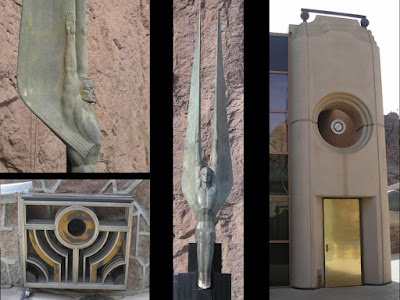 It has marble tiled tunnels and very steep stair cases.  The stair cases are soo steep they have gates about every 15 feet so that if you were to slip.  You would not continue to tumble to the bottom.  There are hidden passageways blocked by mysterious doors with dark corridors lit by orange and blue safety lights.

The texture of the concrete inside the dam corridors is actually a wood relief from the planks used to mold the concrete to the wall.

I understand it is a game and in order to put that amount of detail into it would have probably run down the system even more.  And for security measures the game company was probably told they could not create an accurate model of the Dam.  But I gotta say they did pretty well with what they could use to create the environment and portray the overall feel of the dam. 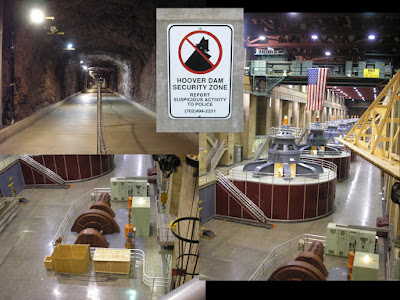 In the Head of Anders Beer, Animation of “Paul”

“Paul” is a fun movie.  It has everything you would expect from a great comedy film.  It includes religious jokes, comic book nerds, hillbillies, sci-fi movie references, aliens, drugs and more. I visited the NEIA Siggrah meeting in October and was able to listen to the head animator Anders Beer from Brickyard VFX.   He spoke about animating Paul and the processes they used.  There was motion capture involved, but allot of it needed to be scrapped and fixed because Paul is an extremely slim character with long arms and it was difficult to find someone who had those features for the motion capture suit.


The one thing that surprised me the most was that he mentioned that they did not animate a facial rig for Paul.  Instead they used a blend shape library where they keyed all the facial expressions.  I asked how it is possible to animate lip rolls or eye lid squishes using blend shapes.  And he mentioned that they needed to build in subtle blend shapes for  those features.  So each blend shape had 2 or 3 subtle blend shapes to get that across in the action.
They also created a puppet for the shots to help the actors so they would have something more believable to work with, then later on layered the cg over it.  A great example of this was the shot where the Nick Frost starts strangling Paul in the passengers seat of the Winnebago.
Another great shot where the motion capture came in handy was when Paul jumps onto the Agents back and grabs his face to stun him with his visions.  They had a small boy in a motion capture suit that they later painted out.  The weight of a live person gave the shot more believability than if the Actor was to pretend something heavy had attacked him.  The fingers of the real boy stretching the Agents face as he struggled helped sell the characters ability to appear as a solid mass effecting another body.
Motion capture has its advantages and disadvantages but I believe in the film “Paul” they used it the right way.  As a tool to make a few physical shots more believable.  And I am glad that the animators did not rely completely on the motion capture performance and used their skills to animate life in Paul to make him more credible.   :)
Posted by Janet Simpkins at 11:00 AM

Diving into the Brain of Pete Paquette

Thursday November 17th the New England Institute of Art had Pete Paquette as the guest speaker for its monthly NEIA Siggraph, meet the Animator event.  Pete is an accomplished dedicated animator who seeks new ways to bring animated characters to life.   As well as working in studios he has his own side project called "Tree House Studios".

I have always loved Scrat from the Ice Age films.  There is this one particular short that involves Scrat being stretched around the core of the earth, with multiple eyes that strobe like a zoetrope.  To my knowledge I had no idea who had animated that part of the short until I had seen it at the beginning of Petes Animation reel.  This gave me the perfect opportunity to ask Pete how he accomplished the effect.

This is the whole short of Scrat below:

Pete was more than happy to explain his planning in such a feat.  To my surprise I had no idea the extent of thought and effort that went into it.  Pete showed us that he used around 17 scrats in the scene.  he placed the center apex of each Scrat at the center of the core of the earth and rotated them all on the same axis.  One of the disadvantages of using motion blur is that you are unable to key the visibility off and on without the character losing the blur effect in the render.  so each scrat was individually rotated around the same axis within small degrees to give the needed effect.  in order to have the strobing featured.  the scrats needed to be keyed on 1.2 1.4 1.5 etc. frames of a frame.  And then there was one scrat designated for the tail animation whipping around the orb.

The whole thing was mind boggling that there was so much effort done on Pete's behalf to get this scene done.  I later asked him if the shot initially had 17 scrats in it wouldn't that make it extremely difficult to manipulate in the maya window.  And Pete replied with, "one of the directors asked Pete if it would be possible to make a change on the shot and have it done the next day.  and then Pete showed him that it would not be possible to do it in one day due to how massively heavy the scene file had become." lol